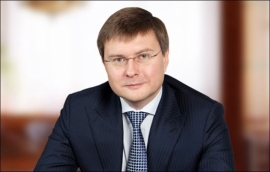 The 36-year-old son of one of Russian President Vladimir Putin’s close allies, Sergey Ivanov, acknowledges that some people may be skeptical about how he landed his latest job as CEO of the world's largest diamond mining company, write Bloomberg reporters Yuliya Fedorinova and Irina Reznik, but he is learning the trade and, "plans to win over investors by focusing on reducing costs at the state-controlled diamond producer." And his cost-cutting starts at the top, as Ivanov says he, "reduced my salary and overall compensation by 20 percent" and apparently declined certain benefits that adhere to his position - keys to gaining credibility for his plans. While the CEO will review Alrosa’s operational and capital spending, the authors note he is willing to cut everything apart from miners’ salaries.

Ivanov also appears keen to reassure investors that the mining giant is not going to, "lose its unique focus on mining by diversifying into polishing rough diamonds." Fedorinova and Reznik point out that the company's shares sank on May 30 after Deputy Prime Minister Yuri Trutnev told Interfax that Alrosa could lower dividends and use some profit to support the diamond cutting industry. "The risk that the new CEO will lead the company toward expanding into diamond polishing was one of the main concerns over Ivanov’s appointment, " said BCS’s Petropavlovskiy, adding that Alrosa’s clear focus and limited polishing operations were seen by major investors as an advantage. Ivanov wants to put those concerns to rest, saying the miner is not going to change course, and that, "We are not going into other commodity groups or to completely switch from sales of rough diamonds to own cutting," he said.

"Cutting shouldn’t be seen as a separate business," Ivanov said. "It is important for us, because if Russian cutting disappears, some other countries will be able to take full control of the market that they already dominate, which poses extra risks for miners." He clarified that Alrosa has no intention to acquire the leading Russian diamond manufacturer Kristall Production Corp, and also said that while Alrosa plans to increase its share of Angola’s Catoca project by the end of the year, mergers and acquisitions outside the African country are unlikely - and this includes Dominion Diamond Corp.