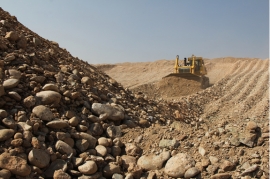 South African junior miner Rockwell Diamonds yesterday published its fourth quarter and annual results for FY 2017, with rough diamond revenues declining by 31% to $26.1million for FY2017, compared to FY2016 ($37.7 million), due chiefly to a 33% decrease in carat sales (18,976 carats to 12,789 carats). Quarterly revenues were down 90% compared Q4 FY2016, due to cessation of mining activities at Saxendrift and Remhoogte-Holsloot (“RHC”), with the sole operation, Wouterspan (“WPC”), being in ramp-up phase. Beneficiation revenue earned through the profit share agreement with diamond manufacturer Diacore amounted to $4.4 million, a decrease of 55% over FY2016 ($9.6 million). This was contributed to mainly by the decrease in carats produced. Meanwhile, the average price per carat remained high, coming in up 4% for FY2017 at US$1,645, compared to FY2016. Prices were down 9% in Q4 FY2016 (excluding royalty miners), while WPC revenues per carat were US$1,888 since commissioning began at the end of August 2016.

The company's loss attributable to owners actually shrank as a result of their restructuring operations: they totalled $(14.5) million for FY2017, compared to $(28.3) million for FY2016. They report that for the first three quarters of FY2017, substantial losses were incurred at Saxendrift and RHC, but these were dramatically reduced by ceasing production at these entities, together with a substantial reduction in the cost base during Q4 FY2017. The two loss-making operations were successfully disposed of in Q4 FY2017, generating much needed cash and reducing overall liabilities with the purchaser absorbing certain staff. Concerning exploration at Stofdraai (adjacent to WPC), Rockwell notes that delineation pitting s in progress, with the possibility of bulk sampling being investigated.

Tjaart Willemse, Chief Executive Officer, sums up the current state of Rockwell Diamonds, as well as the FY2017 and fourth quarter performance, as follows: “On 20th November 2016 the Board passed a special resolution approving a financing package of US$8 million designed to fund a repositioning and development plan with the objective of returning Rockwell to normal commercial operations. Despite the additional challenges brought about by the various legal attacks, we have made good progress against the milestones set back in November 2016. This includes a successful restructuring exercise, a substantial reduction in off-mine and total operating costs, and completion of the construction of the Wouterspan mine infrastructure and processing plant.

It is understood that Rockwell completed a challenging quarter and financial year, which was typified by tough business decisions in the face of a series of spurious and malicious legal attacks from its erstwhile mining and construction contractor. In September 2016 the Company curtailed operations at two of its mines to prevent further cash burn, turning Rockwell effectively into a single-operation business. These operations have since been successfully disposed of to allow the Company to focus on the development of long life operations that meet its investment criteria. Since recommissioning at WPC commenced in late August 2016, overall grade and revenue performed on plan as did actual recovered grade and US$/carat. Delays caused by litigation are the primary reason for higher costs and lower revenue from diamond sales."