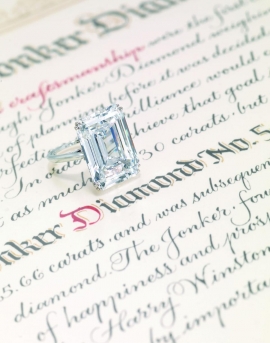 Christie's Hong Kong yesterday auctioned off the famous 'Jonker No. 5' diamond for $5.3 million, soundly beating the pre-sale estimate of $2.2 million to $3.6 million. The 'Jonker No. 5' is part of a legendary collection of 13 stones fashioned from one of the most famous diamonds in history: the 726-carat piece of rough discovered by Jacob Jonker in South Africa in 1934, which at the time was said to be the fourth largest gem-quality diamond ever recovered. The Type IIa stone is D color, VVS2 clarity, rectangular-cut and weighs 25.27 cts.

Initially acquired by De Beers chairman Sir Ernest Oppenheimer, its was sold in 1935 to Harry Winston, who displayed it during the Silver Jubilee Celebrations of the Coronation of King George V and Queen Mary later that year. Winston’s company studied the rough for months before they had Lazare Kaplan cut it into an assembly of 13 exquisite diamond stones. Also sold at the auction was the Emerald and Diamond ‘Palmette’ Necklace, which fetched $6 million. The piece was designed by Edmond Chin for the House of Boghossian, and went into the auction expected to sell for between $3.6 and $5 million.