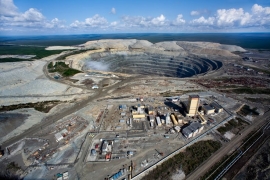 Russian diamond mining giant reported rough-diamond revenue its first quarter results for 2017. Group revenue is up 38% q-o-q but down 17% y-o-y to $1.5 billion (RUB 84.8 bn) for the three months that ended on March 31. Gem-quality rough sales fell by 18% to $1.35 billion (RUB 76.1 bn), with the remaining revenue coming from industrial grade diamonds, gas sales and other products.

ALROSA did manage to sell 17% more in terms of sales volume in the first quarter (14.1 million carats) as these inventory diamonds were generally smaller and cheaper. The goods were stalled last November (2016) due to Modi’s demonetization which affected the Indian market severely.

Net income totaled $400 million (RUB 22.7 bn). “In Q1 2017, we delivered better results compared to late 2016, due to the recovery of demand from Indian rough diamond consumers after a temporary decline caused by the monetary reform,” said Sergey Ivanov, CEO of ALROSA. Revenue was dented as the Russian ruble appreciated 8% against the US dollar, however Sergey commented “what I would like to emphasize here is the success of our cost control program, which ensured a minimum increase in our production costs.”