Lucapa’s Mothae Mine on Track 2018 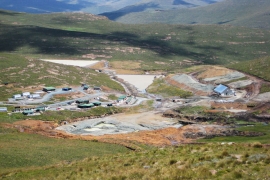 Lucapa Diamond Company secured $14.2 million (AUD $19 million) in funding for the acquisition and advancement of the high- value Mothae Kimberlite Diamond Project located in the southern African country Lesotho. The funding sets Lucapa on track to commence commissioning Mothae in the first quarter of 2018 under a staged, low-risk development plan.

Trial mining for the 8.8-hectare kimberlite pipe produced more than 23,000 carats of rough diamonds, including stones of up to 254 carats and Type IIa diamonds, with individual diamonds selling for as much as $41,500 per carat, reported the miner.  Mothae is considered to be a premium-quality diamond asset which has recovered large and valuable diamonds from bulk sampling and is located in the heart of the highest-price cluster of kimberlite diamond mines in the world, within 5km of Letseng - the highest $ per carat kimberlite mine in the world - and close to the Liqhobong and Kao mines. The JORC estimates Mothae to recover more than 1 million carats of diamonds at a modelled average diamond value of US$1,063 per carat – the second highest JORC average price per carat in the world.

In January Lucapa signed an agreement to acquire a 70% stake in Mothae for $9 million with Lesotho’s government retaining the rest. Originally Lucara Diamond Corporation owned the mine, but in 2015 they decided to offload it. In addition, Lucapa owns the Lulo mine in Angola, another high-value asset, which last year yielded rough with an average price of $2,983 per carat.