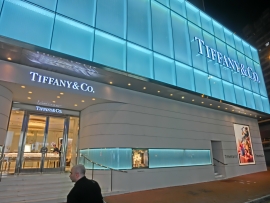 Tiffany & Co. reported Wednesday that while U.S. sales varied by location in the first quarter, they were “generally soft” with both foreign tourists and local customers spending less. In the first quarter ended April 30, the New York-based retailer recorded a 4 percent decline in same-store sales in the Americas, with net sales down 3 percent to $392 million. Worldwide net sales rose 1% to $900 million due to growth in Asia-Pacific - Tiffany's second largest market - and an increase in the wholesale sale of diamonds, while comparable store sales were 3% below the prior year. In that region, total sales of $257 million were 8% above the prior year, while comparable store sales declined 3%. Management attributed total sales growth to increased wholesale sales and the effect of stores opened in the past year, while comparable store sales were affected by strong growth in mainland China - where much of the growth was concentrated - and varying degrees of softness in other markets.

Sales of fashion jewelry, particularly gold pieces in the Tiffany “T” collection, were strong while engagement rings underperformed and high jewelry sales were mixed. Tiffany’s net earnings in the first quarter totaled $92.9 million, compared with $87.5 million in the same period last year. Michael J. Kowalski, Chairman of the Board and Interim Chief Executive Officer, said, “While these results modestly exceeded our near-term expectations, we are focused on executing long-term strategies to achieve stronger and sustainable performance through product introductions, optimization of our store base, effective marketing communications and the delivery of experiences that resonate with our customers. In so doing, we believe TIFFANY & CO. is well-positioned to generate an attractive total shareholder return over the long-term.” Other sales in total rose 32% to $28 million due to an increase in wholesale sales of diamonds.