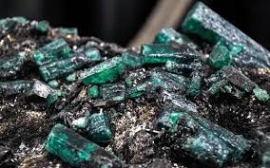 Pallinghurst resources Ltd., a private equity firm focused on mining, who already own 47% of Gemfields Plc, made an offer to acquire the remaining 53% of the gemstone miner in a bid to restructure the company and make it more profitable. Pallinghurst offered investors nearly two shares in Pallinghurst for each share in the colored-stone producer, valuing the miner at $275.6 million. Gemfields’ board has advised its shareholders to not take any action at the moment while they review the offer.

In 2008 Pallinghurst took control of Gemfields by selling Kagem emeralds, mined in Zambia, to the company in return for shares. The deal made Pallinghurst and its co-investors the majority shareholders of Gemfields, which expanded into ruby mining in 2012 by acquiring the Montepuez deposit in Mozambique. In 2013, the miner bought Fabergé from Pallinghurst for $142 million, which brought the equity firm’s share in Gemfields to 47%.
Emerald prices soared in the last decade which encouraged Gemfields to boost production with the underlying effort of advertising and promoting the product.

Since these investments were made Gemfields’ stock performance has been “disappointing” leaving shareholders with a similar sentiment. Since acquiring Kagem Gemfields’ share price has not risen, rather declined significantly over the last year, denting Pallinghurst’s own share price. “Gemfields remains an attractive and unique business,” Pallinghurst said. “However, within the current structure, Gemfields will continue to be constrained by limited access to equity and debt capital markets; low liquidity in the trading of Gemfields shares; a high cost base; and hence depressed profitability.” Pallinghurst has high hopes stating publicly they want Gemfields to be the “De Beers of the colored gemstone industry”.