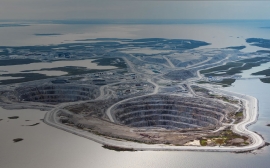 Exploration at the Leslie pipe, an undeveloped section of Dominion Diamond Corporation's operations at the Ekati mine in Canada has revealed a potential of 16.3 million carats at a projected rough-diamond price of $85/ct. According to the company a parcel of 224 carats were recoverd from roughly 680 tonnes of Kimberlite. "The Leslie pipe is our highest-priority pipe amongst kimberlites that have been bulk sampled, as demonstrated by the announcement of its maiden resource”, said Jim Gowans, Chairman of the Board.

“We are mining and exploring in what is still a relatively young mining district,” continued Gowans. “There has been no greenfield exploration at Ekati since 2007, and of the 150 known kimberlites, only about 40 have had follow-up bulk sampling. We believe there is strong potential for further exploration success at Ekati and Diavik, and throughout the highly-prospective Lac de Gras region.”