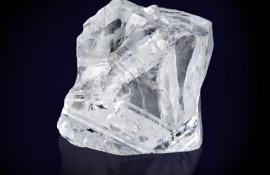 Graff Diamonds announced they had added to their collection of exceptional stones by acquiring the 373.72-carat rough diamond sourced from the Karowe mine in Botswana. The stone was once a part of the Lesedi la Rona, the second largest gem quality diamond to ever be discovered and the largest to be unearthed in the last century. According to Graff the fragment was separated from its famous sibling during the recovery process. As Lucara CEO William Lamb told The Diamond Loupe in May last year, had the stone not broken, it would have been closer to 1,500 carats, but it also would never have been recovered as it would have been too large to pass through the sieves and would have been crushed.

Last week Lucara Diamond Corporation sold the rough diamond, classified a D-color type IIa gem measuring 48mm x 41mm x 22mm, at their exceptional stone tender to an undisclosed buyer for US$17.54 Million. In a statement released on Tuesday, Graff revealed they had purchased the diamond. The British jeweler has yet to reveal what the stone had been purchased for, however they did share that the rough had the potential to yield “a significant polished stone.”

“Every diamond has an inner script that we must read and respect,” said Laurence Graff, founder of the high jewelry brand. “We will now spend time discovering the secrets of this magnificent stone. Knowing that nature has given us this extraordinary gift, we take on the great responsibility of releasing its inner beauty.” Last year the company unveiled the “Graff Venus”, "The largest D flawless heart-shaped diamond in the world." The magnificent type IIa 118.78-carat diamond was cut and polished from a 357-carat rough diamond discovered in 2015 at the Letšeng Mine in Lesotho, a mine operated by Gem Diamonds.  More than half of the world’s top 20 largest diamonds discovered this century have been cut and polished by Graff.