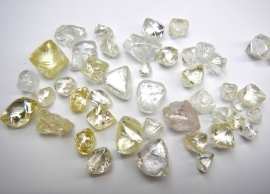 Lucapa Diamond Company completed it’s fourth sale in 2017 from the alluvial diamonds from the Lulo Diamond Project in Angola, achieving an additional $1.3 million in revenues. The miner sold 1,878 carats at an average price of $695 per carat, lower than the $1,317 average the previous month. The latest sale brings total proceeds from the Lulo diamond sales in 2017 to $14.5m, reaching an average of $1,747 per carat.

The value of goods compared to the previous parcel was lower due to the “Special” diamonds – those weighing more than 10.8 carats – which were of lower quality than those at earlier sales, the miner explained. The goods came from a new lower-grade mining block where Lucapa had been focusing its operations during the annual rainy period until ground conditions enable it to mine the more lucrative areas again. With the wet season now over, alluvial mining operations at Lulo would resume at the high-value mining blocks later this month.