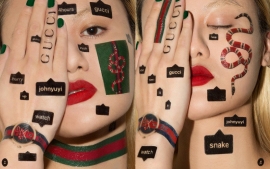 Everlane’s founder, Michael Preysman, who sells classic designs over the internet by promising “radical transparency”, believes he has identified the issues Millennials have regarding provenance and price. He pledges low-cost, high-quality goods made in factories used by designer brands, thus making them more appealing to their consumers. Everlane has a studio in Soho, New York, where shoppers are encouraged to try on the products and then return home and purchase their goods online, an inventive way of combining retail and ecommerce. The concept has proved to be successful with the company reporting $12m in revenue in 2013.

Established players in the luxury industry, such as Gucci and Moncler, have also understood the change in consumer behavior and have made appropriate adjustments. “The winners in the market will be those that innovate the most,” said Gucci’s CEO Marco Bizzarri. The brand repositioned itself to an entirely new image that works well on social media and drastically sped up the supply chain so their ideas can hit the market faster, which is crucial in this competitive industry. Moncler, the high-end outerwear brand led by Remo Ruffini, turned its identity around with a “very strong image” by positioning itself as a brand that others believe is a trend, thus making it more appealing to those who simply follow trends rather than those who set them.

Luca Solca, an analyst at brokerage Exane BNP Paribas, stresses the importance of innovation as “the newness imperative is one of the most important challenges brands will have to tackle.” Solca believes there are three strategies brands can implement: a complete revamp such as Gucci, sticking to your core product like Moncler and the final suggestion being “capsule-driven”, where brands create novel small collections in line with the overall aesthetic.

The internet has definitely impacted this evolution, which luxury brands have had to adapt to. Last week LVMH announced its expansion into the online retail world with the launch of its multibrand ecommerce site, 24 Sèvres.