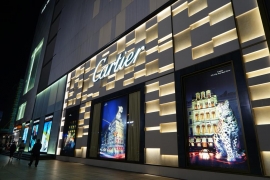 Richemont, the second largest luxury goods company in the world, released its consolidated results for the financial year that ended 31 March 2017. Jewelry sales for the group - including Cartier and Van Cleef & Arpels - were up 7% to $4.55 billion, a growth considered rare for this section of the group’s portfolio. The report suggests the rise was partially offset by a weak watch division as watch sales dropped by 15% to $4.75 billion.

“The continued strength of jewelry was driven by a particularly strong momentum in Asia Pacific and the Americas,” said deputy CFO Burkhart Grund. Jewelry’s contribution to overall group sales rose from 35% to 39% as a result, Grund pointed out. Sales in America and Japan were up due to the reopening of the Cartier flagships in New York and Ginza, which partially mitigated mixed exchange rate effects on tourist spending and the high comparative sales growth figures of the prior year.

Overall revenue from jewelry maisons, including watch sales, slipped by 2% to $6.48 billion, while profit fell 11% to $1.84 billion (EUR 1.68 billion) for the year. This decline was largely due to lower wholesale revenue from timepieces as the company implemented the ‘buy-back’ initiative for the inventory from retail partners that were overstocked. Group sales fell 4% to $11.64 billion, with declines in its wholesale division outweighing growth in its retail operations. Profit plummeted 46% to $1.32 billion for the year, which “posed challenges” for the group, said chairman Johann Rupert. Strong Retail sales in mainland China, Korea, the United Kingdom following the EU referendum, and the United states compensated for the decline in Hong Kong, Switzerland and France.