Hostile Takeover Likely on the Horizon for Dominion Diamond Corp. 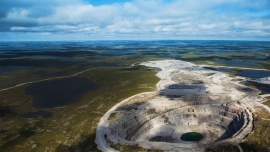 In late March Canadian mining company Dominion Diamond Corp., the world's third largest diamond producer by market value, received an unsolicited $1.1 billion bid from a privately held conglomerate, Washington Corporations (WashCorp), based in Montana. Since soundly rejecting Washington’s offer, and the surge in share prices, Dominion is laying low. In their most recent update, released on May 1, they mentioned a strategic review as well as speaking with a number of interested parties, including WashCorp.

According to Aaron Atkinson, an M&A partner at Fasken Martineau, uncertainty is not unusual. “Dominion Diamond is speaking to potential suitors,” and is considering any number of options, including “a joint venture, [or] it could be a substantial equity investment,” he said. Market watchers have speculated that big players such as De Beers and Alrosa might be interested in acquiring Dominion, as well as smaller players such as Stornoway. According to Reuters, the Canada Pension Plan Investment Board (CPPIB), the country's biggest public pension fund, is also considering a bid. It is unlikely they will make an offer on its own, rater financially back a partner with mine operation expertise.

“It looks as if WashCorp gave up trying to negotiate privately. They released their $13.50 USD cash bid in the hope that it would generate enough shareholder interest that they would vote the deal through,” suggests independent diamond analyst Paul Zimnisky. In the past hostile takeovers required a 35-day period for the bid to take effect, “In the new regime, if WashCorps were to make a bid without the support of the Dominion Diamond board, that bid would have to be open for 150 days,” said Atkinson. “In addition, WashCorps could not take up any shares unless the majority of shareholders tended to the bid. There’s a mandatory minimum tender condition.”

A termination of the lengthy strategic review could send Dominion’s share price back to the level it was at before WashCorps made its bid. However, “if the market anticipates that there will be a better offer, the market may trade right through the original offer price,” said Atkinson.