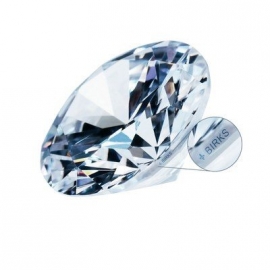 Canadian - or rather, Québécois - diamonds from mine to finger were cause for celebration in Montreal yesterday, as Maison Birks unveiled the first 200 diamonds from Quebec's Renard diamond mine, owned by Stornoway Diamond Corporation. In the presence of Birks Group President and CEO, Mr. Jean-Christophe Bédos, and Matt Manson, President and CEO of Stornoway, invited guests had the opportunity to view a collection of polished diamonds up to and including a magnificent 10.01 carat stone, mined during the initial ramp-up period of Stornoway’s Renard Mine in Northern Quebec and set in Birks’ signature designs. Located 250 km north of the Cree community of Mistissini and 350 km north of Chibougamau in the James Bay region of north-central Quebec, the Renard mine is Quebec's first diamond mining operation.

Matt Manson, President and CEO, commented: “We are honoured to be able to partner with Birks in the presentation of Quebec’s first diamonds to the retail market. It is fitting that these first beautiful, Quebec diamonds derived from Quebec’s first diamond mine should premier for sale at Maison Birks, Quebec’s most storied diamond jeweler. Yesterday evening’s event marked another step in the long journey to bring the Renard Mine and Renard diamonds to the global market.”

Jean-Christophe Bedos, President and CEO of Birks Group, said, “Birks is a resolutely Quebec and Canadian brand. With this year being Montreal's 375th anniversary and the 150th anniversary of Canadian Confederation, we are delighted to unveil these exceptional diamonds, which come directly from Stornoway's Renard mine in Quebec. They are an outstanding example of the quality of our natural resources. As a Canadian leader in the jewelry market, we are convinced they will appeal to our customers, who are increasingly interested in knowing the provenance and traceability of precious stones."

The stones can be purchased individually as loose diamonds, or mounted into a ring, pendant or earrings, according to customer preferences. Each stone will be micro-engraved with Canada’s traditional maple leaf symbol and Quebec’s fleur de lys. The stones also come with a Birks Quebec diamond certificate of authenticity and a unique serial number to confirm its provenance and traceability. Over the next few weeks, the diamonds will travel to several Birks locations including Laval and Ste-Foy in Quebec, as well as Ottawa, Ontario, for customers and others to see. Birks had already made a commitment to offer exclusively Canadian diamonds for its engagement rings. In 2010, Birks was the first jeweller to feature diamonds from the Victor mine in Ontario. Birks guarantees the traceability of each Canadian diamond, from the mine where it originated to the finished product, thereby guaranteeing a 100% ethical diamond.