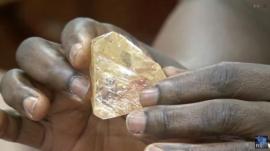 Sierra Leone's government announced yesterday (May 11) that it would seek higher offers in Antwerp for a massive 709-carat diamond after receiving underwhelming offers at auction in Freetown. British citizen Ziad al-Ahmadi, based in Antwerp and reportedly working for Raydiam BVBA, placed the $7.7 million bid which failed to match the government's unspecified reserve price, and turned out to be far lower than the $50 million the Sierra Leone government had originally hoped for, prompting the decision to try again in Belgium. “We are going to sell the diamond in Antwerp, Belgium, for us to get the best (bid) within the next few weeks," said Sahr Wonday, director general of Sierra Leone's National Minerals Agency (NMA). The Antwerp World Diamond Centre is already coordinating with the NMA and Ministry of Mines to set up a new tender for the stone.

Reports emerged back in March that an Evangelical preacher had discovered one of the world's largest rough diamonds in Sierra Leone's Kono district; the 709 carat-stone immediately became the 13th largest gem-quality diamonds ever found. Shortly thereafter, Sierra Leone's Ministry of Mines and Mineral Resources and the National Minerals Agency said that the 709.48-carat rough diamond would be sold inside Sierra Leone by international tender, but after the government received only six offers for the gem, the government decided to postpone the auction until May 10 to allow more time for potential buyers to participate. According to Reuters, five bids were handed to auctioneers in a sealed brown envelope, ranging from $2 million to $7.8 million, which Sierra Leone deemed unsatisfactory. "We've decided not to sell the diamond today because the highest bid price ... does not match the government reserve price," Sahr Wonday, also chief auctioneer, told a packed room.

The huge diamond has a reddish stain that has so far resisted efforts to clean it. Highest bidder Ahmadi told reporters the color of the gem made him doubt it would attract much more than $7 million. Sierra Leone authorities lack the necessary equipment for properly cleaning and polishing the uncut stone. The Ministry of Mines and Mineral Resources said last month it had tried to clean the diamond "by boiling (it) in hydrofluoric acid and nitric acid for 72 hours," but it was not enough to be able to set an accurate value estimate. Deputy mines minister, Ignosi Koroma, says the government is committed to achieving a competitive and transparent sale despite the underwhelming local bids. Emmanuel Momoh, the pastor who found the new diamond in March, was happy to wait for another auction. "I was unhappy with the highest bid price," said Momoh. His stone, he said, "is worth a lot more than $7.8 million."