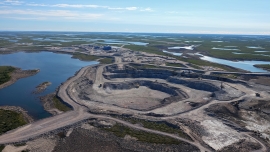 Mountain Province has announced its first quarter results (period ended March 31, 2017) from diamonds sold from the new Gahcho Kué mine, of which it owns 49% in a joint venture with De Beers. Mountain Province earned approximately US$37.7 million from three sales in Antwerp of approximately 522,000 carats - for an average price of $72 per carat. The price achieved per carat at this point is well below the modelled value determined in the 2014 feasibility study of $123 per carat, and fell significantly short of the average appraised value of $184 per carat achieved through a series of bulk samples (Stockwatch Daily on January 3 2017 said Mountain Province's stock price at the start of the quarter, "suggests that investors are expecting the sale will approach the higher value", as did President and CEO Patrick Evans, and have clearly overshot the mark to this point). Mountain Province provided a series of mitigating circumstances to account for the disappointing price, foremost among which is the ‘price discovery’ process Evans said all new producers go through as buyers of rough diamonds assess the quality and potential profitability of the new production.

"This price discovery process usually extends over the first six months of sales as it takes approximately six months before the first rough purchased from a new mine is sold into the polished market," after which prices should increase. And indeed, the average run-of-mine prices increased by approximately 16% in the March sale over the January 2017 sale. Evans also points to demonetization in India, which, "caused severe liquidity challenges in the world’s major diamond cutting and polishing country," negatively impacting sales. He further notes that, the world’s two major diamond producers (ALROSA and De Beers) sold a record combined 28.2 million carats into the rough market during the first quarter, or 58% more han their combined production during the quarter, "making it particularly challenging for a first-time seller introducing new product to the market." Finally, Evans explains that the production sold during the first quarter was sourced from a zone with a comparatively higher population of lower quality diamonds. It should also be noted, as analyst Paul Zimnisky tweeted on May 7, that florescence discovered in higher-quality could have pressured pricdes: "Mountain Province seeing fluorescence in 25% of Gahcho Kué diamonds, selling for 5-30% discount."