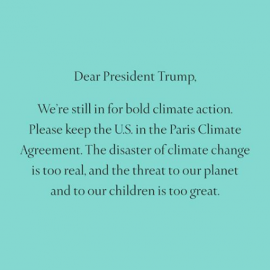 Tuesday morning, Tiffany & Co. posted a message on its Facebook page appealing directly to US President Donald Trump, stating, "Tiffany strongly supports keeping the U.S. in the Paris Climate Agreement" ... and their Facebook page promptly exploded to the tune of 20,000 reactions and over 2,200 shares to this point.

The message, set against a trademark Tiffany blue background, reads, “Dear President Trump, We’re still in for bold climate action. Please keep the U.S. in the Paris Climate Agreement. The disaster of climate change is too real, and the threat to our planet and to our children is too great.”

Predictably, the iconic jeweler's foray into an overtly political and fiery debate unleashed a torrent of comments ranging from support ("Well done Tiffany & Co. Speaking up for the benefit of the world") to reprimand ("I don't think I like my favorite jeweler stepping into the political arena") to infuriation ("Says the company who rapes the earth and sells pieces of her for profit!") and charges of hypocrisy ("Unless you are not consuming or using any resources, I suggest you ZIP IT on this issue. It's funny how all the supposed "Green" earth lovers, fly in jets all over, drive cars and use products that are hurting the environment").

Mr Trump, who has previously called climate change a hoax invented by the Chinese, promised an array of policies during his campaign including to undo Obama’s climate action plan and defund UN climate change work. In November, two weeks after his election victory, Mr Trump said he had an "open mind" on the climate deal. Some expect Trump to keep his campaign promise and pull the US out of the Paris agreement, despite an increasing number of political voices - including that of Rick Perry, Donald Trump's energy secretary - to honor the existing deal. A final decision by the Trump administration is expected in May.

While some commenters say this is an "unusual step" for Tiffany's, Emili Vesilind of JCK points out that, "Tiffany’s been dedicated to causes including the environment and responsible mining for decades. In 2014 The New York Times reported that Michael J. Kowalski, who retired as Tiffany’s CEO and chairman in 2015 but was brought back as interim CEO in February 2017 after Frederic Patrick Cumenal resigned, had plans to become an environmental activist in his retirement."

Will Elon Musk & Tesla get the same treatment?