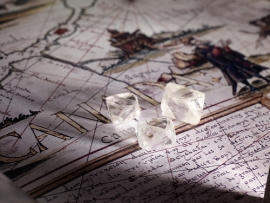 Canadian miner Stornoway Diamond Corporation earned US$35.4 million (C$48.5m) from the sale of 459,126 carats rough of stones for the quarter ended March 31, 2017, the first full operating period for the Renard Mine. Commercial production was officially declared on January 1, 2017. Total diamond sales since the project began now stand at 498,039 carats at an average price of US$83 per carat, "reflecting higher than expected efficiencies in the recovery of small diamonds and higher than expected diamond breakage experienced during processing ramp-up." Stornoway recovered 385,151 carats during the quarter from the processing of 419,233 tons of ore, for an attributable grade of 92 cpht, compared to a plan of 369,307 carats at 91 cpht.

Matt Manson, President and CEO, said that in addition to the higher than normal levels of diamond breakage, which they are working to mitigate, "Pricing has also been impacted by a better than expected liberation of small diamonds and the market effects of Indian demonetization. Nevertheless, we are seeing positive trends in both the quality of our diamond production and in rough market pricing. We are particularly encouraged by the market’s reception for Quebec’s first diamond production." He also notes, "Yields of polished from the rough are reported as high, with good performance during manufacturing. Achieved pricing in the tender sales has been progressively higher compared to our reserve pricing as the market gains an understanding of the production, and tender participation has been strong. This trend has continued into the first sale of the second quarter, which was completed in April. As our production ramp-up continues, our focus remains the quality of our diamond recovery profile and the continued growth of our diamond sales.” Stornoway markets its diamonds in Antwerp.

They reported cash operating costs per ton processed of US$42.18 (C$57.86) per ton (US$45.92, C$62.99 per carat) and capital expenditures1 of US$12.5 million (C$17.1 million), both well within plan. Their total cost of sales were US$26.5 million (C$36.4 million), with adjusted EBITDA of US$10.9 million (C$15.0 million), or 35.9% of total sales. Net loss was US$2.2 million (C$3.0 million), from US$16.5 (C$22.6) a year ago. They also note that all parcels of smaller and lower quality items that had been withdrawn from sale in the first Renard tender in November 2016 have now been sold, and Stornoway ended the quarter with no carried inventory other than normal mine production as goods in progress. Stornoway expects to conduct two tender sales in the second quarter, three in the third, and two again in the fourth quarter.