End of the Road for DiamondCorp? Miner Files for Administration 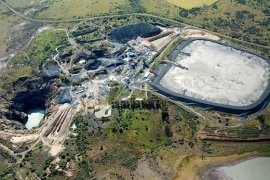 DiamondCorp, the UK-based South African junior diamond miner that underwent an autumn of misfortune including fires and floods at its Lace Mine, has filed to appoint administrators of the company after a business rescue plan failed to result in a solution to their liquidity issues. The decision of the listed holding company to go into administration comes despite being months away from steady-state production, as local bondholders and the Association of Mineworkers and Construction Union (ACMU) frustrated it efforts to refinance, writes Business Day. "DiamondCorp ran into technical, operational and financial problems exacerbated by what it called intransigent labor at is Lace Diamond Mine in the Free State, as it sought desperately for money to bring it over the finish line." The miner leveled blame at the ACMU and bondholders for its inability to refinance the company.

A DiamondCorp representative told Business Day, "The protracted discussion with ACMU obstructed the vital care and maintenance and remediation program of the mine, caused all employees to be retrenched and was the primary cause for the £1m equity fundraiser to not be settled successfully. This, in turn, has led to signficiant liquidity issues for the group and particularly the company." DiamondCorp has been suspended from trade on the alternative exchanges in London and Johannesburg, and its board, "concluded the group is no longer able to continue trading as a going concern." Business Day concludes, "The announcement brings an end to the holding company's fight for survival and bring into production a rare diamondiferous kimberlite in SA."

Yuen Low, analyst with Shore Capital, said, "ACMU were guilty of being very shortsighted. In trying to extract maximum compensation, what they ended up achieving was complete retrenchment of the workforce ... The unfortunate string of problems and resultant production delays saw a vicious circle of 'rescue' raises and increasing dilution ... with liquidation representing the ultimate dilution." He notes that all stakeholders, including key investors who should have provided financial assistance much sooner, carry the blame.