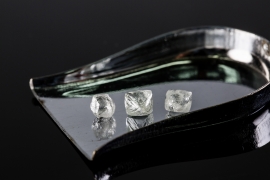 Canadian junior miner Kennady Diamonds, whose Kennady North diamond project is located in Canada’s Northwest Territories in proximity to the Gahcho Kué Diamond Mine, announced the terms of a non-brokered private placement whereby the Company plans to raise approximately C$10,000,000 (US$7.3 million) through the issuance of a combination of common shares and flow-through common shares. The common shares to be issued under the offering have been priced at C$3.25 per share and the flow-through common shares have been priced at C$4.38 per share. It is expected to close on or before May 15, 2017, and is subject to regulatory approval.

The Company intends to use the gross proceeds from the flow-through portion of the offering to incur Canadian Exploration Expenses that are Flow-Through Mining Expenditures (as such terms are defined in the Income Tax Act (Canada)). The Company will renounce such Canadian Exploration Expenses with an effective date of no later than December 31, 2017. The proceeds from the common shares issued under the non-brokered private placement will be used in part to fund the Company’s 2017 exploration and evaluation program on the Kennady North Project, and for general corporate purposes.