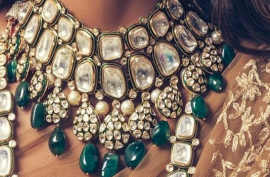 India's Gem & Jewellery Export Promotion Council (GJEPC) has reported overall growth in the industry for the financial year 2016-17 (April 2016 - March 2017), despite what Executive Director Sabyasachi Ray described as a year of “disruption”, referring to various unexpected developments like Brexit, the election of Donald Trump; and, on the homefront, the demonetisation and looming introduction of the Goods and Services Tax (GST). Total exports of cut & polished diamonds amounted to almost US$ 22.784 billion for FY 2016-17, as against around US$20.668 billion for FY 2015-16, representing a growth of 10.24%. Imports of rough diamonds rose nearly 22% during the year, to $17.1 billion from just over $14 billion.

GJEPC Chairman Praveenshankar Pandya said it was his and the GJEPC’s view that the country should become the leading supplier of gold jewelry in the international market by 2022. This was in line with Prime Minister Modi’s vision as well, he stressed. The organisation is preparing a vision statement for 2022 which should be ready shortly, he said, and which will lay out how they intend to achieve their goals. It should include the importance of providing the necessary infrastructure, and to upgrade skills of gems and jewelry artisans and train new personnel for the gems and jewelry industry. Pandya spoke about the move to set up the first Jewellery Park somewhere in/near Mumbai where all technology and services would be available to jewelry manufacturers under one roof, and he said it was essential to have a university for gems and jewelry.