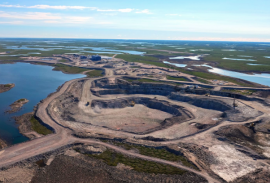 Mountain Province Diamonds announced the production for the first quarter ended March 31 from the Gahcho Kué Diamond Mine. The GK Mine declared commercial production on March 1. For the three months ended March 31 the GK Mine treated approximately 492,000 tons of ore through the process plant and recovered approximately 867,000 carats on a 100% basis for an average grade of approximately 1.76 carats per ton. The Company's attributable share of Q1 diamond production was approximately 424,830 carats (Mountain Province Diamonds is a 49% participant with De Beers Canada in the Gahcho Kué diamond mine located in Canada’s Northwest Territories).

Mountain Province President and CEO Patrick Evans commented: “The production ramp-up at Gahcho Kué continued through the first quarter and we’re pleased to have declared commercial production on March 1, 2017. The ramp-up since the quarter end has continued smoothly and we expect the mine to achieve full production by mid-2017.” During the quarter the Company completed three pre-commercial production diamond sales in Antwerp. Production sold during the first quarter was sourced primarily from an area that has a higher population of lower quality diamonds than the average for the whole kimberlite. As a consequence, realized prices during the first quarter were below the expected average for the 5034 kimberlite as a whole, but are expected to improve as market conditions normalize and more production is sourced.

Mr. Evans added: “The first quarter diamond sales reflect the experience of a new entrant to the market, as buyers develop familiarity with the sell-through value of the Company’s production. The unexpected headwinds from demonetization in India compounded customary weakness during the price discovery period." He noted that 72 percent of the winning bidders at their March sale were repeat buyers. 2017 production guidance is estimated at 4.4 million carats recovered with a grade of 1.62 carats per ton, although they anticipate a price of only between US$70 and US$90 per carat.