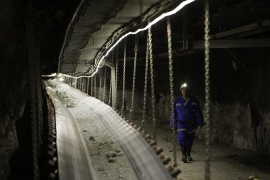 Petra Diamonds reports its rough diamond output in Q3 2017 (January 1 - March 31 2017) remained steady at 999,768 carats, from 995,905 carats a year earlier; however, the company arrived there by increasing Run of Mine (ROM) production 18% to 760,916 carats while tailings production fell 32% to 238,852, in part due to a planned reduction at Finsch and in part due to heavy rain restricting surface recovery. Production for the nine months to March 31 is up 15% to 3.014m carats, from 2.625m carats, further to ROM grade improvements as a result of the ongoing ramp-up of underground expansion projects. The group maintained its full year production guidance of about 4.4 Mcts.

CEO Johan Dippenaar commented that further progress was made with Petra's expansion programs during the three-month period, as evidenced by the higher ROM grades achieved as a consequence of the increased contribution from undiluted ore. "The significant strengthening of the company's balance sheet following the recent debt restructuring, as well as the positive signs we are seeing in the diamond market, position us well as we continue to ramp up production from our capital programmes," said Dippenaar. While underground expansion programs remain in line with expectations, commissioning of the new Cullinan plant commenced towards the end of Q3 FY 2017, with initial production expected during May 2017 and full commissioning planned to be achieved by the end of Q4 FY 2017. Production through the old plant ceased in mid-April 2017 to facilitate the switch over to the new plant.

Concerning the diamond market, Petra writes, "Signs of stabilisation in the rough diamond market are evident with steady demand across all size ranges, including goods which were previously impacted by Indian demonetisation. We continue to witness further evidence of improving retail demand, with some encouraging trends in Mainland China, as well as narrowing declines in Hong Kong and Macau." They note that rough diamond prices were up ca. 2% for Q3 FY 2017 on a like-for-like basis in comparison to Petra's results for H1 FY 2017. A further two tenders will be held during Q4 (April to June 2017) and Petra expects market conditions to remain stable during this time, with Q4 being traditionally Petra's strongest sales period.