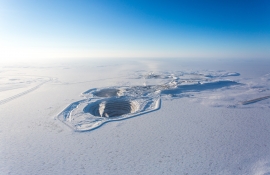 Against the background of a bear market for iron ore in full tilt, a 43-day strike at the world's largest copper mine causing its output to fall 37% and the Group edging closer to an exit from thermal coal after winning approval from Australia’s foreign investment regulator to sell the bulk of its mines for $2.45 billion, the Rio Tinto Group's Q1 diamond output dropped 8% year on year to 4.152 million carats. At its Argyle Mine in Australia, first quarter carat production was 11 percent lower than the first quarter of 2016 and 16 percent lower than Q4 2016 due to lower ore volumes processed and recovered grade, achieving 3.016 million carats.

At the Diavik mine in Canada, of which it owns 60% with Dominion Diamond Corp. owning 40%, Q1 2017 production was unchanged from the first quarter of 2016, as lower ore throughput was offset by higher recovered grades. The 1.136 million carats represented a 15% increase over Q4 2016. They also note that development of the A21 pipe remains on schedule. Their diamond production guidance for 2017 remains unchanged at 19 to 24 million carats. Total production in 2016 was 17.953 million carats.