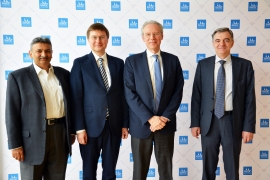 ALROSA’s new President Sergey Ivanov led a senior delegation from the Russian diamond miner to Antwerp today to get acquainted with their partners at the Antwerp World Diamond Centre. The high-level visit focused on the longstanding cooperation between ALROSA and the AWDC, reconfirming their privileged relationship and discussing the current and future outlook for the rough diamond market. Antwerp, the world's leading diamond trade center, and ALROSA, the world’s largest producer of rough diamonds in terms of volume, formalized their partnership and mutual interest in a cooperation agreement signed in 2013; today the parties successfully negotiated the further development of bilateral cooperation, including the promotion of diamond trade, implementation of educational programs and the exchange of information. They also discussed the possibility of ALROSA's participation in the events dedicated to the 570th anniversary of the diamond trade of Antwerp to be celebrated in 2017-2018.

As a result of this established partnership, the European Union, and more specifically Antwerp, is the primary market for Russian exports of rough diamonds, receiving nearly 60% of the Russian miner’s output. Consequently, the Russian Federation is the source of 31% of all rough diamonds imported to Antwerp, making it the largest supplier of rough diamonds to the Antwerp diamond industry. AWDC’s Diamond Office, which is the supervisory body of the Belgian government responsible for all diamond imports to and exports from Antwerp, registered imports of nearly 28 million carats of rough diamonds from Russia in 2016, representing total value of 2.5 billion dollars - a 33% increase in volume and a 25% increase in value over the year before.

The Russian delegation was led by the new President of ALROSA, Sergey Ivanov. The visit to Belgium was Ivanov's first international trip since becoming Alrosa head a month ago. He was accompanied by Mr. Andrey Yurin, Head of the Gokhran of Russia. They were welcomed by the President of AWDC’s Board of Directors Mr. Stéphane Fischler, the Vice President of AWDC’s Board of Directors Mr. Nishit Parikh and several members of AWDC’s management team. They further discussed the current state of affairs regarding the Kimberley Process and the contributions of the World Diamond Council to its efforts, before holding a working meeting at the Beurs Voor Diamanthandel.