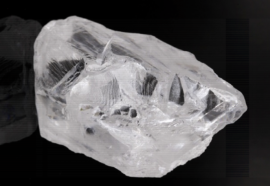 Australian junior miner Lucapa Diamond Co. reported a significant increase in diamond recoveries and processing from their Lulo Diamond Project in Angola in the March quarter of 2017, according to an ASX announcement. Lulo alluvial mining company, Sociedade Mineira Do Lulo (40% owned and operated by Lucapa) achieved record throughput volumes of 70,967 bulk cubic metres in Q1, a 91% increase over the same period a year prior. The increased processing resulted in a 33% increase in diamonds recovered to 4,098 carats. They also recoved 38 Specials (+10.8 carats), a 38% increase over Q1 2016 (24 Specials). This included the second largest diamond ever recovered in Angola - a 227-carat D color Type IIa stone, along with other large gem-quality stones weighing 92, 65 and 62 carats.

While the volumes recovered were higher, the grade was 30% lower, at 5.8 carats per 100 cubic metres and a 15% reduction in the average size per stone, at 1.2 carats. Lucapa sold US$10.7 million (A$14.0 million) in rough stones during the quarter, followed by the third sale of year in April of 1,919 carats for US$2.5 million (A$3.3 million). The proceeds from their sales are currently generating funding for exploration to find the kimberlite source of the high-value diamonds being recovered from the small-scale alluvial operations.