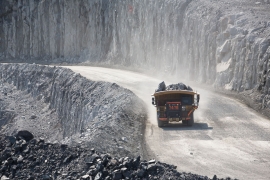 Dominion Diamond Corporation reports strong growth in gross margins, adjusted EBITDA and net income of $5.6 million - despite a 27% decline in sales - in Q4 of the fiscal year ending January 31, 2017. This was attributable to ramp up of high value production at Ekati and steady performance at Diavik. The sale, late in the quarter, of Ekati mine goods from higher value Misery Main open pit and Koala underground ore processed in late Q3 fiscal 2017, together with higher processing volumes at the Diavik mine in the same period, paved the way for their stronger consolidated gross margin. Their Q4 sales results are in line with overall sales for the year, falling to $570.9 million from $720.6 million, a 21% decline.

Nonetheless, they state that the market ended the year on a positive note despite the divergence between the resilient market for larger, higher quality goods and the more challenging situation for smaller, relatively cheaper goods. On the whole, Jim Gowans, Chairman of the Board, is upbeat about their prospects, citing a robust project development pipeline, renewed exploration focus and strong balance sheet, which support long-term value creation strategy. “We continue to execute on our long-term strategy and create value for all shareholders. With the support of our strong balance sheet, we are well-positioned to advance a number of key development opportunities and begin reinvestment in near-mine exploration at both Ekati and Diavik,” he said.

The company is particularly bullish heading into fiscal 2018, forecasting that sales are expected to be between $875 and $975 million, compared with $720 million in 2016, and should benefit, as mentioned above, from the high value ore processed from the Ekati mine in recent months. They also expect sales are to benefit from the ramp up of ore from the Pigeon and Lynx pipes at the Ekati mine during the remainder of the year and strong production from the Diavik mine. Dominion expects its adjusted EBITDA to be between $475 and $560 million, up from $182.2 million last year.

In general, they say the diamond market continues to show signs of recovery from the impact of demonetization in India, however the lower value segment of the diamond market is expected to recover at a slower pace than the higher value segment. The guidance for fiscal 2018 foresees the sale of a higher volume of lower value diamonds that were previously held back from sale and remained in inventory due to the weaker market conditions following the demonetization. This is expected to affect the average price per carat sold as well as the number of carats sold. The average price per carat sold is expected to range from $70 to $90 per carat.

Looking further ahead, according to their three-year scenario, they expect sales and Adjusted EBITDA to increase significantly in fiscal 2018 compared to fiscal 2017, and to remain robust through fiscal 2019 and fiscal 2020. Combined production from their Diavik and Ekati mines is expected to rise to between 9.1 and 10 million carats in each of the next two years, and then dropping back to 7.6 to 8.4 million carats in 2020. They anticipate sales for the coming three years to range from $875 million to $1 billlion.