Apollo and Artemis: "The most important pair of earrings ever offered at auction.” 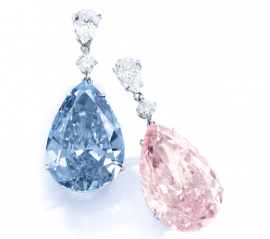 Sotheby’s spring sale of Magnificent Jewels and Noble Jewels at Mandarin Oriental, Geneva will be led by the ‘Apollo and Artemis Diamonds’. Individually, these diamonds – one Fancy Vivid Blue, one Fancy Intense Pink – are truly exceptional stones and when considered as a pair, they enter a class of their own: according to David Bennett, Worldwide Chairman of Sotheby’s International Jewellery Division, they are, “By far the most important pair of earrings ever offered at auction.” Perfectly matched in size, cut and tonality, the stones are currently mounted as a spectacular pair of earrings, but are being offered separately, on account of their extreme rarity, power and presence., ‘The Apollo Blue’ will be presented with an estimate of $38 – 50 million (CHF 38.1 – 50.2m) and ‘The Artemis Pink’ is estimated between $12.5 – 18 million (CHF 12.5 – 18.1m).

The Sotheby's press release by Vivienne Becker reads: "The Apollo Blue is a Fancy Vivid Blue, 14.54 carats, Internally Flawless, Type IIB, and 'The Artemis Pink', a Fancy Intense Pink, 16.00 carats, VVS2 clarity, Type IIA; both are amongst the purest, chemically, of all diamonds, with an alluring limpidity, while the Apollo belongs to the most elite group comprising less than one-half of one percent of all diamonds, pure, with the presence of boron, the element that gives the diamond its blue colour. Diamonds of this quality, with this extraordinary depth and sophistication of colour, and of this size are unfathomably rare. The sheer randomness of their very existence, the confluence of cosmic conditions that generated their miraculous formation process, billions of years ago, deep in the earth, is wondrous. Twinned, as they are, both cut into lyrical pear-shapes, and named, appropriately for the most revered and powerful of Olympian deities, enhances and intensifies their rarity, mesmerising beauty, dignity and distinction."

The sale features jewellery from different collections comprising signed jewels and superb gemstones. Gems from Kashmir, Burma, Colombia rub shoulders with signed jewels from the most iconic and well-known jewellery houses, such as Cartier, Van Cleef & Arpels, Lacloche, Bulgari, Schlumberger and Tiffany. The exhibition will be on View: London 7-11 April; Dubai 13-16 April; New York 21-24 April; Hong Kong 27- 28 April; Taiwan 2-3 May; Singapore 5-6 May; Geneva 13-16 May. The auction will be held on May 16.