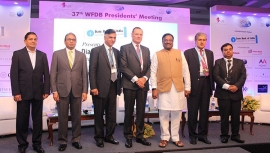 Back in February, the Gems & Jewellery Export Promotion Council (GJEPC) hosted the "Diamond Financing 2017: New Opportunities, New Realities" seminar coinciding with the 2017 Presidents Meeting, the biannual gathering of the World Federation of Diamond Bourses (WFDB). Avi Krawitz reports on the proceedings: "The bankers still view diamonds as a high-risk sector. Representatives from the diamond trade, meanwhile, feel there has been significant progress in improving the industry’s level of compliance, transparency and so-called bankability. It appears that both are correct - there has been progress, but more needs to be done given the regulatory environment constraining the banks." The diamond industry has faced increasing capital requirements and ever-more-stringent regulations in recent years, straining relationships with financial institutions. Ernie Blom, president of the WFDB, said, “It is essential for diamond companies to understand these changes and adjust their approach to continue to thrive. But we must also emphasize the way our industry has embraced self-regulation in order to shatter the myths that unfortunately are attached to our business.”

Krawitz enumerates the steps the industry has taken with regard to financial compliance and governance, looking at the transparency standards of the larger companies, as well as the issues faced by small-to-medium-size enterprises (SMEs) - particularly those in the Indian context. He notes, "While there is a call for the Indian banks to support SMEs with more credit, there is also concern they’re too liberal with their lending to the industry - especially compared to their counterparts in Antwerp, New York and Ramat Gan. There are about 40 banks that lend to the trade in India today, but only about five really understand the way the industry works, one banker told the conference." As for the bankers, "profitability and reputational issues emerged as the biggest concerns." The level of 'non-performing assets' - or more simply, defaults - has been twice the average of other industries since 2008, which is why the diamond trade is in the “negative risk category,” reported PS Jaykumar, managing director at Bank of Baroda.

While it appears the core success of the meeting was for industry representatives and bankers to listen to one another's concerns, frustrations and strategies for improvement, Krawitz identifies perhaps the essential tension as boiling down to the following: on the one hand, Erik Jens, head of diamond and jewelry clients at ABN Amro, argued that new channels [of financing] combined with what funding is available from traditional banks, mean that the industry has no shortage of credit options for "bankable companies". On the other hand, speaking for diamond companies, Blom argued that this was not the case, adding that those financing alternatives were still in their early stages. He quotes Blom as saying, “The trade’s inability to secure enough credit is the most pressing challenge facing the industry. The lack of funds has reduced liquidity available to diamond companies, which has affected business flexibility and made companies considerably more vulnerable to market movements.” Jens, he writes, countered that the real stress had less to do with financing, and more to do with companies’ profitability, margins, sourcing, and the ability to manufacture the right goods at the right time.