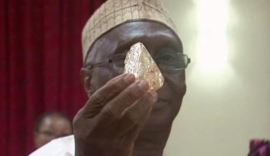 The government of Sierra Leone said Wednesday April 5 that it was extending the bidding for a massive 709-carat diamond found by an Evangelical preacher last month, after the government received only six offers for the gem, writes Times of Israel. The original plan was to open the bids today, April 6, but bids will now be accepted until May 10 - in particular to allow more time for potential buyers from Belgium, Israel, South Africa and the United Arab Emirates, a government spokesman said - with the auction to be held the following day. According to reports, the Sierra Leone authorities lack the necessary equipment to properly clean and polish the uncut stone, which currently appears to be coated by a reddish stain.

The Ministry of Mines and Mineral Resources said it had tried to clean the diamond “by boiling (it) in hydrofluoric acid and nitric acid for 72 hours,” but it was not enough to be able to set an accurate estimate of its value. "We had to do with what we have to ensure that the diamond is sold with quality to the highest bidder as soon as possible,” said Sahr Wonday, director general of the National Minerals Agency. The diamond was unearthed by Emmanuel Momoh, a 39-year-old pastor who is also one of hundreds of artisanal miners in Kono, Sierra Leone’s key mining district.