Investor Agarwal To "Persuade" Anglo To Mine Diamonds in India 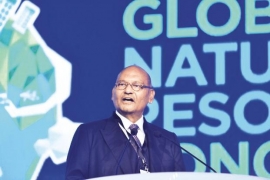 Last week, BloombergMarkets reported that Anil Agarwal - the founder and controlling shareholder in Indian resource giant Vedanta Resources Plc. - paid $2.5 billion for 13 percent stake in Anglo American, a transaction that immediately made him Anglo’s second-biggest shareholder. At the time, Bloomberg reported that he has no intention of behaving like an activist investor: “At the moment, I’ve come in purely as an investor on my personal capacity and that is the intention,” said Agarwal. “We’ve never been an activist. We’re purely an investor and we are going to support the management.” Bloomberg said his,"ultimate intentions ... remain unclear." Today, his intentions may have become a bit clearer.

As businessfortnight.com reports after an interview on the sidelines of the Global Natural Resources Conclave, "Vedanta Resources Plc.’s founder and group chairman Anil Agarwal plans to leverage his association with Anglo American Plc. to persuade the British miner to set up businesses ranging from fertilizer production to diamond mining in India." They quote Agarwal as saying, "We are now looking at this work (the stake acquisition) that we have done as strategically being very important for India. We have focused on the fact that it (De Beers) is the largest global producer of diamonds and we (India) are the largest polisher of diamonds. We want all the diamonds to come to India. Secondly, India has enough diamond reserves. We will persuade them to produce diamonds in India,” said Agarwal. “We are a large shareholder in the company and they are also a friend of ours. So, we will speak with them."

Agarwal’s stake purchase in Anglo American came after the company last year spurned his offer to merge part of his mining business. On the off chance that the billionaire cannot 'pursuade' the miner to pursue diamond production in India, businessfortnight.com writes that Agarwal did not rule out acquiring a controlling stake in the firm, whose key assets include giant copper mines in Chile, iron ore operations in Brazil and South Africa and De Beers. And if his speech yesterday at the Global Natural Resource Conclave, where he called for, "building a new India by exploiting resources to create jobs for all and eradicate poverty on the back of consumption by 1.3 billion-strong population" is any indication, he just might do it.