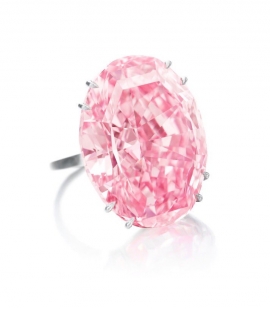 The Pink Star diamond has become the world's most expensive gemstone, selling at auction today for $71.2 million (£57.3 million) including buyer's premium, writes Sarah Royce-Greensill for The Telegraph. The 59.60-carat pink diamond is the largest Internally Flawless, Fancy Vivid pink diamond ever graded by the GIA, and sold for above its estimate of $60 million (£48.3 million) at Sotheby's in Hong Kong. It breaks the record previously held by the Oppenheimer Blue diamond, which sold for $57.5 million at Christie's in Geneva last May. It has also become the highest price item ever sold at auction in Asia. After bidding from three clients, the diamond was sold to jewelry retailer Chow Tai Fook, who was on the telephone to Sotheby's Asia CEO Kevin Ching, for a hammer price of 490 million Hong Kong dollars ($63 million). The sale total was 553 million Hong Kong dollars once the buyer's premium was added.

The Pink Star was cut from a 132.5-carat rough diamond mined by De Beers in Africa in 1999. It had been offered for sale before, achieving a record $83 million at Sotheby's Geneva in November 2013, but the buyer, New York-based diamond cutter Isaac Wolf, defaulted on his payment, leaving the stone to be added to the Sotheby's inventory. David Bennett, Worldwide Chairman of Sotheby’s Jewellery Division, said, “The extraordinary size of this 59.60-carat diamond, paired with its richness of colour, surpasses any known pink diamond recorded in history.” Before the Pink Star sold, the record price for a pink diamond at auction was $46.2 million, achieved by the 24.78-carat Graff Pink, which sold at Sotheby's Geneva in 2010. The Pink Star is more than twice as big as the Graff Pink, and its colour rating, 'Fancy Vivid', is the highest possible grade on the scale used to assess coloured diamonds, and therefore considered the most valuable, writes Royce-Greensill.

The 59.60-carat Pink Star is worth a $1.2 million per carat. That isn't enough to break the price-per-carat record currently held by the Blue Moon of Josephine, a 12.03-carat Fancy Vivid blue diamond which sold at Sotheby's Geneva in November 2015 for $48 million: over $4 million per carat.