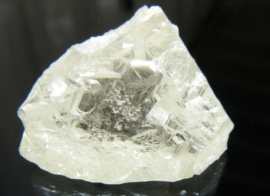 Australia's Lucapa Diamond Co. is ramping up kimberlite exploration efforts at its primary resource, the Lulo alluvial mining project in Angola. The company has fully commissioned a new high-capability Hanjin D&B drilling rig, with which they will start drilling priority targets as part of the kimberlite exploration program. The rig is one three that will be drilling kimberlite through the June 2017 quarter when the Angolan wet season ends, typically in April. The aim is to identify the kimberlite source of their high-value diamonds frequently recovered at the Lulo alluvial project. Lucapa's exploratory drilling will be guided by a helicopter-borne time-domain electromagnetic (TDEM) survery, which is now approximately 80% complete. The TDEM survery seeks to identify non-magnetic anomolies or targets and improve the definition of known priority kimberlite targets in the Cacuilo River valley mining block.

Lucapa also announced the recovery of a D-color Type I 92-carat diamond from their new Mining Block 28 at Lulo. The recovery brings the total weight of all special (+10.8 carats) stones recovered at Lulo to more than 10,000 carats.