DiamondCorp Lays Off All Employees at Lace Mine, South Africa 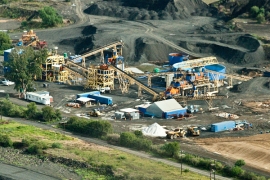 DiamondCorp, the UK-based South African diamond miner that underwent an autumn of misfortune including fires and floods at its Lace Mine, announced yesterday it will lay off all the mine's employees after a business rescue plan failed to result in a solution. The announcement comes after discussions between a mining union - the Association of Mining & Construction Union (AMCU) - and DiamondCorp's lender - the Industrial Development Corporation of South Africa (IDC) - ended without a settlement being reached on a collective agreement to allow care and maintenance to commence. DiamondCorp notes that, "As a further consequence of the retrenchment," the status needed to obtain new funding is no longer available.

Lace Diamond Mine has appointed Lebogang Mpakati of Independent Advisory as joint Business Rescue Practitioner, alongside Daniel Terblanche of Deloitte & Touche, but the Board of DiamondCorp also advised the Business Rescue Practitioner and the IDC that, "unless there is an accelerated plan and route for funding in place which can be completed by mid-May 2017, including a significant restructuring of all debt, and successful exit from the Business Rescue process, then it is likely that the Group would need to be placed into administration."