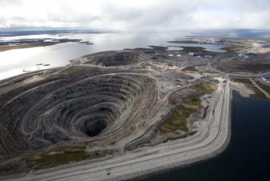 Dominion Diamond Corporation on Friday March 31 filed an updated technical report for the Diavik Diamond Mine that extends the life of the mine two years and raises production estimates going forward. The mine in the Northwest Territories, in which Dominion has a 40% interest and Rio Tinto plc has a 60% interest and operates the mine through DDMI (Diavik Diamond Mines Inc.) will continue to produce until 2025 instead of ending its active life in 2023. The extension is calculated to yield an increase of 6.3 million carats, or 16% above the previous estimate, and is now expected to reach 46.0 million carats recovered between 2017 and 2025. Forecast total revenue will increase 22% to approximately $9.0 billion and total operating cash flow will increase 32% to approximately $3.7 billion between 2017 and 2025.

Despite these increases, Dominion states, that total operating costs between 2017 and 2025 remain consistent with the previous estimate for the comparable period, as the impact of cost escalation and the increase in mine life and reclamation are offset by efficiency improvements. They also see total capital expenditures between 2017 and 2025 remaining consistent with the previous estimate as a rusult of lower expected capital expenditures at the A-21 pipe offseting higher sustaining capital expenditures related to cost escalation and the increase in mine life. Jim Gowans, Chairman of the Board of Directors, says, “The updated life of mine plan for Diavik extends the mine life, increases carat production, and grows future revenues and cash flows, while maintaining operating costs and capital expenditures at levels that are consistent with earlier forecasts.” This becomes particularly interesting given the context of Dominion considering selling the mine, which has been the source of much speculation over the past two weeks.

Gowans adds, “The focus on cost efficiency improvements and development of the A-21 pipe, which underpins the mine life extension, is consistent with our goal of increasing net asset value per share.”