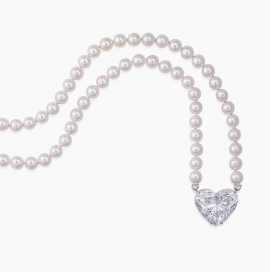 Christie’s upcoming auction of Magnificent Jewels will take place on May 17 at the Four Seasons Hotel des Bergues. Consisting of approximately 250 exceptional jewels, it will include a thematic section comprising 30 exceptional pieces from Italian makers, important gem stones, coloured diamonds and signed jewels. Prior to the auction, a selection of pieces will go on tour to Hong Kong, New York and London. From 5-8 May the highlights will be shown alongside the 20th Century Art preview, before they return to Geneva. The highlights on view will include a 92-carat D-Flawless heart shaped diamond pendant, signed by Boehmer et Bassenge. The Maison de Haute Joaillerie, supplied by the Rare Diamond House - Antwerp, was launched last year and named in honour of Charles Boehmer and Paul Bassenge, Parisian jewelers of the 18th century.

Working exclusively with a handful of large, D colour, Flawless clarity diamonds of perfect polish and symmetry, the Maison Boehmer et Bassenge creates exceptional pieces of jewellery in honor of the craftsmanship of their eponym. With an uncompromising attitude to quality, just a few pieces are produced each year. Having sold the first unique jewels over the course of 2016, Christie’s will present two further pieces this spring in Geneva: La Légende is a diamond and cultured pearl necklace containing the 92.15 ct stone and estimated at US$14-20 million. It is the largest D Flawless heart shaped diamond ever to be offered at auction. La Vie Bohème is a pair of chandelier earrings, each with an asymmetrical pink diamond bow, a pear-shaped diamond connecting link, each suspending a marquise-cut diamond weighing approximately 10.07 and 10.05 carats. Each drop is also a D-Flawless diamond, with perfectly symmetrical cuts. The estimate for this pair of earrings is US$ 2-3 million.

The sale will also feature a 15.03-carat ruby of Burmese origin, pigeon blood colour and few inclusions; a Kashmir sapphire weighing 14.88 carats and of excellent purity, a combination rarely encountered in sapphires from Kashmir of this size (estimate: US$1.0-1.5 million); a fancy deep blue diamond ring of approximately 4.05 carats, estimated at US$4,200,000–5,200,000/CHF 4,200,000–5,200,000. Another highlight is the property of an elegant Lady, a diamond necklace by Chopard, suspending a pear-shaped diamond weighing approximately 56.03 carats, and offered with an estimate of US$5-7 million. Further, a ‘Diamond and platinum necklace mounting, by Cartier’ from “The Doris Duke Collection”, which was originally purchased at Cartier New York on April 30, 1937 for $65,000. Only the mounting was auctioned in 2004 as Doris Duke had all of the larger diamonds in this important necklace unmounted. It has been restored to its former glory which will be offered at auction with a pre-sale estimate of US$ 3-5 million.