Baselworld To Scale Back in 2018 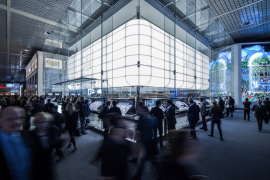 "The organizers of Baselworld, the world’s largest watch and jewelry fair, have recognized that it is in a state of decline," writes Anthony DeMarco for Forbes. "At a time when the fair has reached the milestone of 100 years, fair organizers announced that they are reducing the 2018 edition by two days and cutting prices for exhibitors, following several years of exhibitor and attendance declines." The organization announced in a press release that visitor figures were down 4% to 106,000 buyers. But, "The largest drop was in exhibitors," writes DeMarco, which fell, "13.3 percent from a year ago, from 1,500 to 1,300."

Commenting on the outcome of this year's show, Sylvie Ritter, Managing Director of Baselworld, said, "the industry is currently going through a challenging phase, which particularly affects smaller companies. Listening to our exhibitors and in agreement with the member of the different Committeess, we have decided to reduce the duration of the show and adjest the prices accordingly. Thus, Baselworld 2018 will be held from Thursday 22 to Tuesday March 2018. DeMarco points out that, "this acknowledgement was a contrast to the defiant stance Baselworld officials took at the annual press conference prior to the show’s opening on March 22. There they said it was their decision to turn away exhibitors to focus on 'quality over quantity.' Ritter said at the time, 'We have turned away exhibitors who are not in line with our concept and do not meet the criteria for Baselworld.' However, she refused to define this criterion."