Brad Brooks-Rubin, the "Enough Project" on a New KP 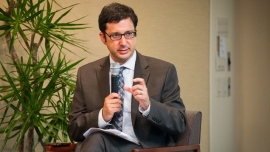 “It is time for the international community and the diamond industry to put the process into the Kimberley Process and enable the initiative to move into a new chapter. Or it will really become ‘bull—,’” said Brad Brooks-Rubin of the Enough Project. Brooks-Rubin, who shared his view with JCK’s Rob Bates, is the latest, following Vinod Kuriyan, chief editor of GEMKonnect, to stand up in defense of the now infamous statement Martin Rapaports made at the Mines to Market conference hosted by the GJEPC regarding the Kimberley Process. Brooks-Rubin represented the United States in the Kimberley Process (KP) Certification Scheme for more than four years.

Each year companies and governments spend millions of dollars to implement an initiative Brooks-Rubin believes is ‘outdated’ as it no longer represents how the world responds to supply chain concerns. He suggests it either be overhauled or eliminated, however “It is better that the KP evolve than completely collapse.” Since its announcement in 2000, the KP has been overtaken by learning and experience. Cross-border certification is not offered in other sectors due to it being ineffective and expensive. The certification structure has failed to ensure diamonds from conflict locations, from the Ivory Coast to Venezuela, remain out of the supply chain. The overwhelming majority of the KP certificates are issued to countries that do not face the threats of diamond-fueled conflict.

Brooks-Rubin believes the KP is “a meaningful system capable of addressing issues that matter” however it needs to evolve and not waste time and government resources. Retailers using KP as a response to questions regarding sourcing should instead focus on responsible sourcing. He urges KP’s stakeholders to reassess their response to concerns regarding the supply chain to 2017’s standards, and not repeat what was said in 2000. “That means eliminating universal certification and enabling efforts focused on due diligence and development.”