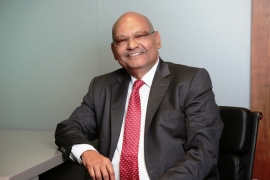 Anglo American Plc’s billionaire shareholder, Anil Agarwal, said he had no intention of behaving like an activist investor following his $2.5 billion investment for a 13% stake earlier this month. He continued by staying he had no plan to buy Anglo’s assets in South Africa, or to push for a seat on the board. The investment was made through Agarwal’s holding company, Volcan Investments, rather than Vedanta Resources.

“At the moment, I’ve come in purely as an investor on my personal capacity and that is the intention,” said Agarwal in an interview in Lausanne, Switzerland. “We’ve never been an activist. We’re purely an investor and we are going to support the management.” His 13% stake secures him as the second-largest shareholder, although his ultimate intentions remain unclear. The unusually structured deal has analysts speculating that he may be planning to force a break up of or a merger with the century-old miner, Bloomberg reported.

Anglo American owns 85% of diamond mining company De Beers, as well as copper and coal operations, while Vedanta focuses on commodities such as zinc, lead, silver, copper, iron ore and aluminum. According to Bloomberg, the billionaire isn’t using his fortune to purchase the shares, rather borrowing from bond investors through a three-year note paying a coupon of 4.125 percent. This structure suggests he’s essentially renting the shares until the bond matures, with little benefit from a rising stock price.

Agarwal has offered to help the miner to expand in India, including selling diamonds to the country. “There’s a lot of synergy between India and Anglo and Africa,” Agarwal told FT. “If Anglo feels at some point of time they need to expand their business, I can volunteer to help them navigate the country. It would be nice if they can have a foothold in India.”