Varda Shine to Join Sarine Board 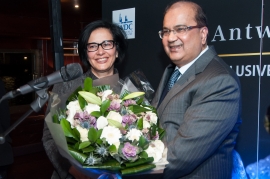 Singapore’s Sarine Technologies announced that former CEO of De Beers Diamond Trading Company (DTC) Varda Shine is to join the Board of Directors as an independent director. Shine’s position is subject to approval at Sarine’s annual general meeting to be held on April 25.

Shine’s career within the diamond industry spans 30 years. Since leaving De Beers, Shine served as an independent director of the Mineral Development Company Botswana, a company wholly owned by the Botswana Government, and as a non-executive director of platinum producer Lonmin. In addition, she is also a board member of the Diamond Empowerment Fund, an international non-profit, supporting education initiatives in diamond producing countries.

Sarine Executive Chairman Daniel Benjamin Glinert said, "We are extremely proud that Varda has agreed to join us and serve as an independent director on Sarine's board. Her addition to our board will bring with it a wealth of experience, knowledge and networking that will greatly benefit the company". Glinert added, "As the group focuses its expansion and growth on the downstream polished diamond trade segment of the diamond industry, and in compliance with corporate governance principles, the company's board has decided to diversify its composition.

Reportedly three of the sitting directors, Harel, Mashiah and Stark, have decided to step down at the end of their current term and not seek reappointment at the upcoming AGM. The is board actively seeking two others replacements, optimally with experience in the retail trade of polished diamonds in the North American and Asia Pacific markets.