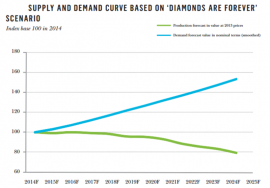 The diamond industry's famous supply and demand chart - the 'hungry crocodile' - representing its forecast of rising rough diamond prices as production falls to shortage levels, "Not only has never materialized, it oversimplifies the fact that the industry’s 15,000 different categories of diamonds are performing in very different ways," writes Thomas Biesheuvel for Bloomberg. Particularly in the last year, lower quality stones have faced downward pressure on prices even as overall prices reportedly rose 8%, revealing a disconnect within the industry itself, as higher quality diamond prices crept upwards. "Over the past year," writes Biesheuvel, "rough diamond prices have risen 8 percent. But that’s a very misleading guide if you’re producing a higher percentage of lower quality stones which have underperformed the wider market, with some categories of cheap diamonds falling as much as 20 percent."

Underperformance in lower quality goods as a result of oversuppy and India's demonitization in particular has led to producers pulling some of their lower-grade rough from sales, and prompted Gem Diamonds to shutter its Ghaghoo mine in Botswana, saying prices had fallen a third to $152 a carat since 2015. In contrast, the average price of diamonds from its Letseng mine in the mountains of Lesotho fell 26% in 2016 and still achieved $1,695 per carat, down from $2,299 over the previous year - still among the highest price per carat in the world. “In most commodities there’s a homogeneity; that doesn’t exist in diamonds,” said Clifford Elphick, chief executive office of Gem. “When you talk to investors about the thousands of different categories of diamonds you see their eyes glaze over. It’s just too complicated.”

As Biesheuvel points out, "The diamond industry is heavily dependent on seven giant mines, all aging rapidly. While most mines produce a broad spectrum of diamonds they are anything but equal," which places greater importance on producing efficiently and cheaply. Anish Aggarwal, a partner at Gemdax in Antwerp, adds, “A greater degree of granularity is needed now to look at what the demand and supply looks like for each particular project ... When you’re looking at a project you’re tempted to use a generic pricing model. The one thing that’s missing is that the different segments of the diamond market are not being modeled.”