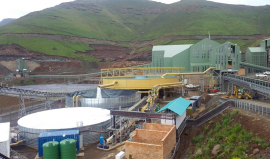 Firestone Diamonds reports its unaudited interim results for H1 2017 - six months ended 31 December 2016 - highlighting the completion and commissioning of its Liqhobong Diamond Mine (Project) leading to its post-period initial two diamond sales in Antwerp. The Project was completed on time and within the US$185.4 million budget, and commissioning commenced in October 2016. Firestone achieved nameplate capacity on multiple occasions and 402,440 tons treated, recovering 57,723 carats at a total cost of $5.6 million. Highlights include the recovery of a 37 carat white diamond, alongside a further 20 special stones larger than 10.8 carats as well as several fancy yellow diamonds.

Financially for the period, Firestone recorded a loss before tax of $4.1 million, which was slightly lower than the prior year loss for the same Period of $4.6 million. However, due to a deferred tax charge during the Period of $4.6 million, the Group's loss after tax is $8.8 million (H1 2016: $4.6 million), with a loss per share of 2.0 cents (H1 2016: 1.5 cents). At the end of December, the Group had access to total debt facilities of $29.0 million, comprising $14.0 million from the ABSA Debt Facility, which has now been fully drawn, and the $15.0 million standby facility. The physical project construction was complete by the end of December 2016 and from a funding perspective, $173.8 million had been spent against the original Project budget of $185.4 million, leaving a balance of $11.6 million to be paid in the second half of the year as scheduled final payments become due.

The Group's total assets increased by $35.8 million to $250.0 million (FY 2016: $214.2 million) mainly as a result of the continued expenditure on the Project, offset by a decrease in the value of the deferred tax asset. The Group began the Period with cash of $10.3 million, drew down $25.0 million from the ABSA debt facility and spent $1.9 million on operations, $19.9 million on the Project, $8.7 million on working capital and incurred net finance costs of $1.5 million, resulting in a closing cash balance of $3.3 million. Two sales took place in Antwerp subsequent to the Period end, the first in February and the second in March 2017. Total sales proceeds of $13.7 million were received from the sale of 127,590 carats at an average price of US$107 per carat. Mine commissioning progressing with continued good recovery of special stones and steadily increasing grade.

Stuart Brown, Chief Executive Officer of Firestone, commented: "Finishing the construction of the Liqhobong Diamond Mine and commencing production in October 2016 are two momentous milestones for the Company and I would like to sincerely thank all of the team that has made our vision possible. This has been a very successful Project from a construction and commissioning perspective. To have completed the Project within the budget in a very difficult environment and without any lost time injuries, makes us all very proud." Liqhobong is owned 75% by Firestone and 25% by the Government of Lesotho.