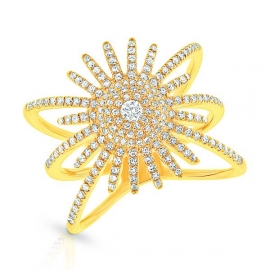 Jewelry designers have anxiously waited for the results of JCK’s annual Jewelers’ Choice Awards. The coveted spot not only leaves one designer as a winner, but also international exposure as the winning piece is featured on the March-April issue of JCK’s magazine. Although many introduced a design for the competition, there could be only one winner; Shy Creation, an LA-based brand founded by chief designer Shy Dayan.

The winning jewel is a 14 karat yellow gold starburst ring with 0.58 carats of diamonds from the Kate collection, named after the designers’ sister Kathy. The ring retails for slightly under $1,500, making it a beautiful yet relatively affordable piece.

“We feel incredibly humbled to win a Jewelers’ Choice Award,” says Kathy Dayan. “Our team works very hard to expand on the beauty that is already in this world, and create jewelry that makes people happy. When we see the smile on someone when they get a Shy Creation piece, that’s the best part! We also want to thank our team at Shy Creation and all of our customers who loyally support us. We would not be where we are without them.”