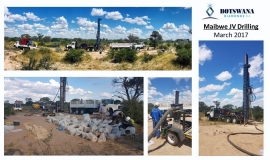 Botswana Diamonds PLC published its interim financial results for the six months ended 31 December 2016, said its loss narrowed in the first half of the current financial year, and said it has been a "very active time" for the miner in recent months. The miner highlights the appointment of a new managing director in December as James Campbell took over as managing director of the business and, during the first half, Botswana Diamonds entered into a phased earn-in agreement with Vutomi Mining Pty Ltd, a late stage diamond explorer in South Africa. Maibwe, the company's joint venture in the Kalahari desert in Botswana: "Drilling deep inside the inaccessible Kalahari Desert is challenging but it was successfully accomplished by a Botswana Diamonds team.  Analysis will take up to 2 months." The London-listed company also agreed that Botswana Diamonds will drill verification holes following the encouraging results from 2015.

Meanwhile, a 2017 work program for the Orapa and Gobe licenses in Botswana was also agreed with its other partner ALROSA. "This joint venture is beginning its seventh fieldwork programme in April.  The focus remains on the Orapa and Gope regions of Botswana.  The intensive and extensive exploration programme on PL 260 in Orapa did not produce the desired results.  A proposal exists to drill the remaining known kimberlite on the block, AK 23.  There are ongoing discussions between Alrosa and the Company's specialists regarding the optimal way to proceed."