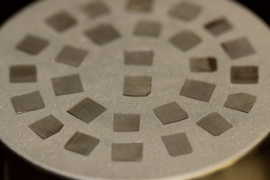 The U.S. Department of Justice, through its District of Minnesota U.S. Attorney's Office, has announced a federal indictment charging former Scio Diamond Technology Corporation (Scio Diamond) Board of Directors Chairman, Edward S. Adams, with "orchestrating an elaborate fraud scheme to embezzle millions of dollars of investors' funds." The indictment alleges the activity happened between 2006 and 2013. Adams was indicted Wednesday in U.S. District Court in Minneapolis on eight counts of mail fraud and six counts of wire fraud, accused of stealing more than $4.38 million from investors between 2006 and 2013. In addition to the money he allegedly deposited in his own accounts, prosecutors say he quietly paid his own law firm, formerly Adams and Monahan, more than $2.54 million in addition to the $1.59 million the firm received in fees.

Adams got involved with Apollo Diamond, which created diamonds in a laboratory for industrial use and as gemstones, when the company hired Equity Securities to raise over $25 million for the company. Adams was one of Equity’s principals, and the company’s commission was over $3 million. Apollo’s founder was Adams’ father-in-law, and he entrusted Adams with fundraising and financial decisions with little to no oversight. Adams then worked as Apollo’s chief financial officer, president and in other roles. His law firm also got the “vast majority” of its revenue representing Apollo. Prosecutors say Adams took “advantage of the trust placed in him,” creating multiple personal bank accounts and depositing money intended for Apollo, as well as giving significant funds to friends.

With investors growing angry, Adams and Monahan created a new company, Scio, which would buy Apollo and award new shares to the investors, so long as they promised not to sue. Adams eventually raised the $2.1 million he said Scio was paying for the acquisition, and took most of the money for himself and his law firm. “The former Apollo … shareholders now held shares in a publicly traded, operating company, which appeared to them as a better option than retaining shares in entities that they were informed were on the verge of insolvency,” the indictment reads. “Adams’ plan succeeded, and he was able to avoid ‘potential massive litigation from disgruntled shareholders’ ” — quoting a letter Adams had written to his father-in-law — “and prevent investors from discovering that he had stolen millions of dollars of Apollo investors’ money, all while lining his pockets with additional money from new investors in Public Scio.” The company issued a release stating that Adams has had no involvement with Scio Diamond or the new Board of Directors since the conclusion of the successful 'Save Scio' proxy battle on June 23, 2014. They write, "Scio Diamond is also hopeful these proceedings will result in restitutions to the Company for the benefit of all shareholders."