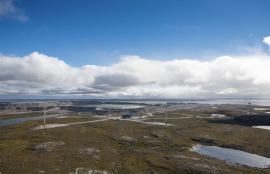 Canadian diamond miners Dominion Diamond Corp and Stornoway Diamond Corp have held talks about a potential merger in recent months, reports Reuters. The people that disclosed the matter declined to be named as the discussions are private. "The talks include Stornoway's chief executive officer and president, Matt Manson, becoming CEO of the merged group, one source said, adding that the discussions on an all-share merger started in January. Dominion, which owns the Ekati diamond mine in Canada's Northwest Territories and a 40 percent stake in the nearby Diavik mine, is looking for a new CEO after announcing on Jan. 30 that Brendan Bell had resigned. A union with Dominion would give Stornoway, which owns a single mine, an avenue for growth, the sources said."

Dominion Diamond has been in the news lately regarding a supposed hostile takeover bid by Washington Corps, a group of North American mining, railroad and transportation assets founded by billionaire Dennis Washington. Dominion yesterday clarified that no offer had been made; rather, it had received an "unsolicited" expression of interestand that it characterized as "opportunistic" undervalued the company. However, Dominion added they would be open to further discussions provided the terms are more favorable, as the terms of the proposed talks were said to be unusual and unacceptable. Shares in Dominion surged as much as 26 percent on Monday on the Washington proposal to a session high of $12.53 on the New York Stock Exchange. They closed at $12.20 for a gain of 23 percent, below the $13.50 a share Washington offered.

Reuters further notes that, "Lawrence Simkins, president of Missoula, Montana-based Washington, said in Sunday's statement the group remained 'fully committed to completing this transaction.' The group declined to comment on Monday when asked if it would take its offer directly to Dominion shareholders." Mining giant Rio Tinto, already a partner of Dominion, owning 60 percent of the Diavik mine, has been named as a potential suitor.