The Neglected Demographic: the Midult 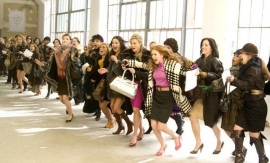 Every marketeer has spent countless hours strategizing on how to target millennials, which has led them to neglect an important audience: introducing the Midult. Paula De Luca, creative director of trend forecasting company Trendvision, defines the midult as a women between the ages of 35 and 55 who has spending power – in other words, a Generation X female, born between 1960 and 1980. Following millennials and baby boomers, Gen X is the third largest generation in America, making up 25% of the 60 million adults in the U.S.

The term “midult” is trademarked by a British media website of the same name that caters its content to these women, who reportedly make up the most powerful consumer group in Britain. According to their mission statement, “we wanted to take a fresh look at the power and potential of women like us: funny, digitally literate, and extremely anxious.” These women have a disposable income that far exceeds that of a millennial girl.

“The self-purchasing woman is being ignored or underserved by the traditional jewelry industry and as such she’s going elsewhere to purchase jewelry, not in traditional specialty jewelry retail stores but in department stores and non-traditional spaces,” MVI’s CEO, Marty Hurwitz said. He continues by suggesting that we need to cater to their needs, as handbag and shoe designers have done, as they have the spending power, however “they just don’t really spend that much on jewelry because nobody is inviting them to do it.”

Jewelers of America’s Gizzi, “(The midult) grew up before the rise of the internet, yet is young enough to be fully immersed in all technological advancements. She expects high levels of customer service and rewards the stores and brands who offer it. Most importantly, she grew up with parents who deeply loved jewelry and all it stands for. That love was likely passed down to her and if the jewelry industry treats her well, she will pass that love down to her children.”