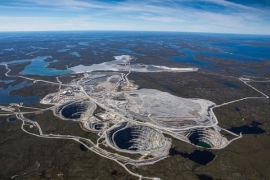 Canadian mining company Dominion Diamond Corp. received a $1.1 billion bid from a privately held conglomerate in Montana, but the two sides are at a negotiating impasse, setting the stage for a public takeover fight, writes The Wall Street Journal. On Saturday, Dominion Diamonds released a statement confirming it had received an unsolicited, conditional and non-binding expression of interest from the Washington Corporations (“WashCorps”) to acquire the company, calling the expression of interest, "Opportunistic," adding that Dominion, "believes it does not recognize all of the value in the Company under its current business plan." Dominion says they will, "allow WashCorps to conduct extensive due diligence on Dominion’s unique assets and growth potential in order to improve their expression of interest," however, they repeatedly point out the, "lack of credibility of WashCorps in the diamond industry," that "WashCorps does not have experience in the highly specialized diamond mining and marketing industry," and says, "to indicate that diligence is confirmatory based on public records is highly questionable."

Washington Corps, a group of North American mining, railroad and transportation assets founded by billionaire Dennis Washington, approached Dominion in late February with an offer of $13.50 a share, confirms WSJ. "That represents a 36% premium to Dominion Diamond’s closing price of $9.92 Friday, when it surged more than 12% after the company disclosed strong earnings guidance for fiscal 2018. But the two sides have failed to reach agreement on how to proceed." The WSJ adds that Washington sought a period of exclusive negotiations while Dominion asked Washington to agree to a standstill that would prevent its suitor from going public with the offer or buying shares. Dominion's response states, "The Dominion Board is more than willing to consider all value-creating opportunities for the Company, but it will not do so to the detriment of its shareholders and other stakeholders. The Board of Directors reiterates its openness to engage with WashCorps on customary terms."

The WSJ writes that Washington, which could increase its bid if it is able to conduct due diligence, is now taking the offer public in a move that could pressure Dominion through its shareholders. This is not the first time Dominion has been under pressure to sell. Back in December 2015, BloombergBusiness wrote: "Dominion Diamond Corp. has hired financial advisers to explore a sale as the Canadian miner comes under pressure from shareholders about its falling share price, according to people familiar with the matter," adding that the company had been, "targeted by a group of shareholders, led by Toronto-based hedge fund K2 & Associates Investment Management." K2 & Associates eventually obtained two seats on the board. At the same time, two of Dominion's independent directors resigned, facing shareholder pressure for a shakeup due to its plunging share price, and in January they announced CEO Brendan Bell would step down in June 2016.

Just last week, Dominion released an optimistic guidance for fiscal year 2018 (ending January 31, 2018), expecting sales to be between $875 and $975 million, an increase of 62% compared to fiscal 2017 sales, assuming the mid-point of fiscal 2018 guidance is achieved. This would more than triple its EBITDA compared to 2017 comparison. After this announcement, Dominion's shares rose sharply on Friday.

Dominion's statement concludes by stating: "While the Board has repeatedly offered to constructively engage with WashCorps on customary terms, WashCorps continues to demand, as a condition to any discussions, a lengthy period of exclusivity, as well as the ability to veto the Board’s choice of new CEO. WashCorps has also refused to accept a customary form of standstill that would restrict it from using the confidential information to acquire control of the Company ... In other words, WashCorps is seeking a self-interested “free option” to learn of Dominion’s business and prospects, while paralyzing the Company."