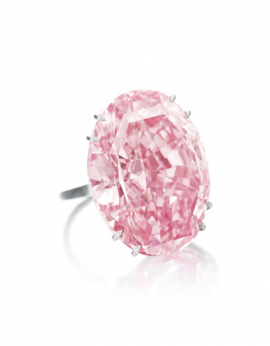 This spectacular 59.60 carat, fancy vivid pink, internally flawless oval cut gem – the largest internally flawless or flawless, fancy vivid pink diamond that the Gemological Institute of America (GIA) has ever graded - will hit the auction block at the Magnificent Jewels and Jadeite sale at Sotheby’s Hong Kong on April 4, where it is estimated to sell for more than $60 million. The diamond came from a 132.5-carat piece of rough mined by De Beers in Africa in 1999 before being cut and polished by Steinmetz Diamonds over a period of nearly two years. Of all fancy coloured pink diamonds, those graded ‘Fancy Vivid’ are the most precious and desirable. The current world auction record for a pink diamond is the Graff Pink, a superb 24.78 carat diamond which sold at Sotheby's Geneva in November 2010 for US$46.16 million. Weighing in at 59.60 carats and graded as Fancy Vivid, the Pink Star is twice the size.

The Sotheby's website writes: "The diamond was first unveiled to the public in May 2003 as the ‘Steinmetz Pink’, and was modelled by Helena Christensen at a dedicated event thrown to coincide with the Monaco Grand Prix. Writing in the Financial Times on the 31 May 2003, Mike Duff described the diamond as “the rarest, finest, most precious stone the world has ever seen”. The stone was first sold in 2007 and was subsequently renamed “The Pink Star”. In the same article, Tom Moses, Executive Vice President and Chief Laboratory and Research Officer of the GIA, is quoted as saying: “it’s our experience that large polished pink diamonds – over ten carats – very rarely occur with an intense colour… The GIA Laboratory has been issuing grading reports for 50 years and this is the largest pink diamond with this depth of colour [vivid pink] that we have ever characterised”.