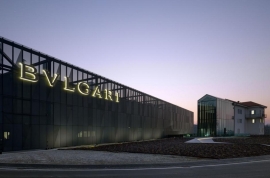 Bulgari, an LVMH-owned jeweler and watchmaker, announced the opening of its new jewelry manufacturing facility in Valenza, Italy, a mere 18 months since the foundation stone was laid. It is one of the largest expansions of Bulgari’s exclusive “made in Italy” manufacturing network. Bulgari strategically chose Valenza, famous for its goldsmith history and the Cascina dell’Orefice (est. 1817), as the location for the new site, which they expect to create an additional 300 jobs by 2020. The new ‘Manifattura’ site joins the network of Italian manufacturing facilities where Bulgari products are crafted by Italian artisans. High jewelry is produced in Rome, accessories crafted in Florence, perfumes in Lodi and silk in Como – with the only exception being watches, which are made in Switzerland, where they bear the prestigious Swiss Made label.

The site, designed by architectural firm Open Project and constructed using materials with a low environmental impact, consists of two buildings: the first features a new wing encased entirely in glass, appropriately dubbed the Glass House; the second houses production operations spanning three floors around a 600-sq.m. interior courtyard, inspired by a Roman domus. “This new facility is a perfect fusion of past and present, bringing together a love of beauty and the artisanal savoir-faire that has made Italy the world leader in jewelry and goldsmithing,” says Jean-Christophe Babin, CEO of Bulgari. The development will be used for the production of certain prototypes, as well as the creation of increasingly complex pieces and collections. The plant also includes the new Bulgari Jewelry Academy, a project intended to train younger craftsmen on the skills necessary to make rich artisanal jewelry. The first class counts 21 young jewelry artisans and has capacity for 42 students.